Welcome to Comic Craze! Chat here about comics you’ve read or comics you know of! Know any cool Christian comics? Please share about them here! Christian comics are pretty rare (at least from what I’ve seen), and I’d love to check out any recommendations you guys may have, Christian or non-Christian.

Don’t really read comics? That’s fine. But maybe you create them? Post your comics here to share with others! I myself am an amateur digital artist and an aspiring webcomic creator, and I’m sure there are other comic creators around here too. If you have any knowledge on how to create comics, share your advice with us!

Maybe you’ve been to a comic convention before? Whether it be cosplay, merch, or meeting creators at panels, feel free to tell us about your experience!

Manga discussions are welcome here too. Just make sure to keep discussions wholesome and appropriate. And if you’d like to review a comic, let us know why you did or did not enjoy it, and why you might or might not recommend it to certain audiences.

With that said, let the comic discussions begin!

YESSSSSS THIS IS A GREAT TOPIC.

I LOVE comics. My favorite daily newspaper comic is For Better or for Worse by Lynn Johnston. SO GOOD! It’s not Christian, but it’s pretty deep and real nonetheless. And the artwork is beautiful. Other comics I like include Kevin and Kell by Bill Holbrook, Foxtrot by Bill Amend, Calvin and Hobbes by Bill Watterson (There are sure a LOT of “Bills” in the comic book industry. . .o.o) and Zits by Jerry Scott and Jim Borgman.

I write a little bit a comics myself. I would LOVE to become a graphic novelist someday.

Should I start posting a page of my new comic series every week?

looks up from a book on how comics qualify as literature Um. Most comics (aside from the friendly newspaper ones) tend to be somewhat inappropriate for various reasons. Comic books of serious caliber tend to be hard to find, and even harder if you’re trying to find Christian ones that aren’t inappropriate. If you’re into that, perhaps Classics Illustrated or Maus might be cleaner than most, but Maus is Holocaust memoir so obligatory violence and depression warning.

As for Christian web comics, try this guy: https://adam4d.com/ His approach is a bit political and sardonic, but IT’S CHRIIIISTIAN!!! As the guy who wrote the book I was reading on comic books told me, comics tend to be a bit subversive and critical of social norms. Example: 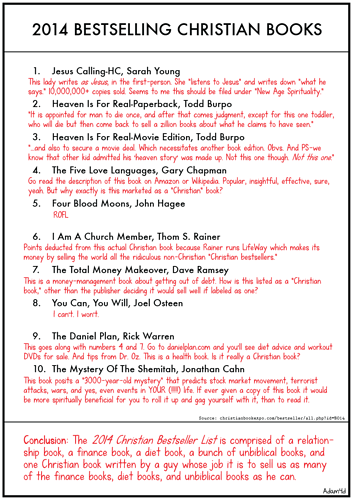 Also of interest MAY be this: http://www.christiancomicarts.com/page/webcomics-list

However, a lot of “Christian” comics on the internet tend to actually bash Christianity (remember, comics tend to be rebellious and subversive) so you have to be careful.

As for me, I have actual trouble reading “real” comics for some reason and “getting” everything in them - there’s a visual meaning tracking circuit in my brain that is broke. Actually I probably have multiple breaks in there looks over at the weird results of my visual design projects. It’s almost easier for me to deal with audio. Weird. (sorry, digression) So it’s not quite my area of interest, but I wish everyone interested in it well on their creations and search.