'Dragons of the Archipelago' Bios

Here we are at the Bio topic, most of you know what this means, for a basic thing to how to do this, just try this maybe:

Name: Sigfrid Ymir
Alias: Lost Rider, Ymir
Race: Uknown
Eye color: my right is red while my left is ice blue
Hair color: Dark brown, honey redness at tips
Hair length: short level of ears.
Skin color: tan skin
Height: 5’ 8" 1/2
Personality: Arrogant, sarcastic, funny, Nerd, a loner at times, rude, blunt, not easy to get her trust or respect, leader and tomboyish.
Favorite Activity: Reading about dragons, fighting, writing about things to know about Changewings.
Habits: She has a habit of calling herself a genius
Hobbies: Riding her Changewing, reading about dragons, practicing her weapons, she fights every style but her favorites are knives and archery.
Occupation: Spy for the dragon riders, in the Dragon hunters place.
Dragon: Changewing, it’s name is Rageflight, girl
Backstory: She’s never known where she came from, she grew up in a small village on an island near Vanaheim, there just outside the fog. She lives near the town and works sometimes to pay for some food. The island she lives on is infested with Changewings, that’s how she met Rageflight when she was a young girl. On a storm, her dragon dragged her away from home. She ended up in a deserted island where she isolates herself and reads everything she can about dragons. Even though she could leave, she finds it peaceful there and only leaves when something important happens.

Alias: Of The Sky (Unusual, I know) 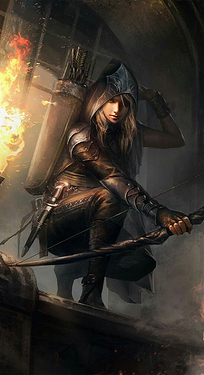 Deepest Fear: That someone will try to make her settle and live a peaceful life.

Favourite Activity: Being a spy for anyone willing to hire her (for a descent pay), she enjoys filling her time with the art of silent flying and attacking with her dragon.

Habit: Leaving her alias carved in cliffs of places she’s been.

Hobbies: Whatever catches her fancy, but mainly her job.

Occupation: Spy for anyone who will pay her lots of money.

Dragon: A type she engineered herself: A cross between a pureblooded night fury and pureblooded Deadly Nadder. Her dragon has the body of a Night Fury (minus retractable teeth), but the tail of a Deadly Nadder so it can shoot the poisonous spins from it. The dragons is a female, is about 16 years old, and her name is Cloudburst. She can alter her color from black to sky blue. So if she wishes, she can make herself virtually invisible in the sky.

Backstory: Ayvanna‘s father was a dragon hunter along with her mother. Ayvanna didn’t really care until she went with her parents. They had given her a knife so she could kill her first dragon. She got separated from them and encountered a Night Furry. But she considered him so beautiful she didn’t make any attempt to hurt him and he flew away. The same happened with a Deadly Nadder.
Her parents gave up on her being a dragon hunter because she was more interested in not so goring things. She would also disappear for days at a time. This was because both the Deadly Nadder and the Night Fury who’s life she had spared, had returned.
After reading every book on dragons the village, Ayvanna craftily bred the two.
The Deadly Nadder gave birth to a dragon who was a cross between her and the Nigh Fury. Ayvanna instantly made interaction with it and the parents trusted her with it. So they flew away, never to return. Not long after that, Ayvanna own parents died and all she had was Cloudburst. She learned to ride her they ran away from that island to pursue adventure.

Dragons of the Archipelago Discussion Thread

I think the best way to keep this role play going is to have a gang like the show.

Then I shall begin to make a gang.

Name: Aiden O’Ruairc (Aiden appropriately means “Fiery”)
Aliases: Patches, The Wandering Irishman, Aiden the Raider, Trader O’Ruairc
Affiliation: Mercenary–will help both riders and hunters for money.
Nationality: Irish, with a little Norwegian
Eye color: Blue
Hair color: Red enough to scare a dragon
Age: Appears to be in his early 20s, but never discloses his true age.
Height: 5’10"
Personality: sarcastic, selfish, outgoing, audacious, unscrupulous, and more clever than he might let on
Strengths: decisive, sneaky, resourceful, persuasive
Weaknesses: overconfident, limps when he walks because one leg is shorter than the other due to a past injury, likes to work alone and consequently has few allies
Occupation/Hobbies: Sailing around the Archipelago selling exotic wares, singing Gaelic songs, spreading outrageous rumors, and catching pickpockets literally red-handed with the crimson berries he keeps in his fake money pouch (they also double as a snack).
Dragon: An irritable green Terrible Terror named Shriek the Toothful Terror that enjoys singing…badly. Good thing his master enjoys singing, too.
Clothing: A conglomeration of various pieces including armor from fallen Vikings, a patched-up tunic and breeches (don’t ask), fur-lined boots that are tough enough to stop a Terrible Terror’s teeth, and a tattered cape just for show.
Weapons: dagger on the right side of his belt since he’s left-handed
Backstory: none to speak of
Appearance: 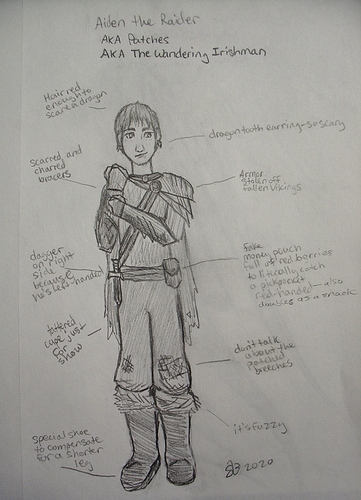 I have another character idea!

Name: Erik Thrand.
Nickname(s): None.
Gender: Male.
Background: Unknown.
Allegiance: Dragon Hunters.
Age: 19.
Eye Color: Green.
Hair: Short, light brown.
Body Frame: Average, strong.
Height: 5’10".
Clothing: Grey/silver armor made with Groncle Iron. (Also partly dyed dark green)
Intellect: Average. He knows a little about dragons, but not that much.
Inventiveness: Not very good at inventing things or creating strategies. He would rather fight his way through his problems. Why “plan” through them? It just doesn’t make sense.
Combat Skills: He has more combat skills than the average hunter because he trained in his home village to have expert hand to hand combat skills. However, he just ends up using whatever weapon he can get his hands on. His favorite weapon is a sword. (And a knife just in case…)
Habits: He tends to go after the groncles so he can make more Groncle Iron. It sells for a lot of gold you know.
Hobbies: Counting gold, trapping dragons, selling dragons (for gold), polishing his armor.
Family: Unknown.
Friends/Allies: Dragon Hunters.
Fears: Unknown.
Likes: Gold, Cavern Crashers.
Dislikes: Dragon Riders, Milking Yaks.