The Ancient Order -A Free For All Roleplay- Discussion

Welcome to the Ancient Order, this is a Star Wars roleplay that is based off of times during the Old Republic . This roleplay covers the Great Hyperspace War where both Sith and Jedi sides are trying to gain the upper hand with Hyperdrive. I need people to be Sith, Jedi, Soldiers, shifty lowlifes, or common people. If you want to join the roleplay just send a message about your character and then hop in…
If you have any questions just ask.

How do i send my bio?
do i just post it here?

Yes. Thanks for your interest in this role play.

Can you give me more details?

Name: Thasurian
Alias: Lord Thasurian, Milord.
Things he likes to be called but nobody calls him: The ruler of the known universe
Race: Zabrak
Allegiance: The Sith
Current home: Coruscant
Appearance: 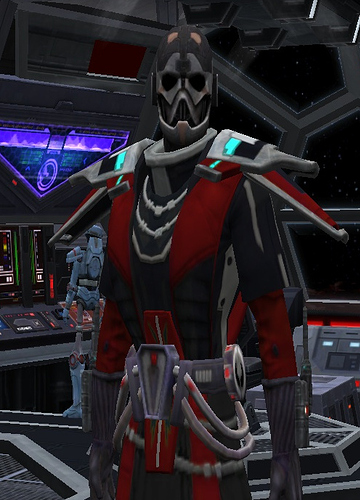 So basically this is 150 years before the Old Republic. Before the Republic came into existence there was an almost galactic wide nation called the Order of the Galaxy. This nation was led by the Jedi and its military was primarily formed of Jedi (during this time the Order saw no need for regular people to serve in military). There was no hyperdrive in these days so travelling across the galaxy took months to a year to get to most planets. During the beginning of this 150 years the Sith started founding themselves on the planet of Exegol. About 20 years later the Sith emerge and start attacking the Order. Basically the first person to create the first hyperdrive will win the war. Also there is less regulations on the Jedi and there force powers. Such as certain force abilities that were lost in the days of Anakin Skywalker like force healing and blocking (blocking is only capable by using the force as a shield).
I hope this helps you out @CaptainRex.

Soooo, this is the hyperspace war.

Thank you, that explains a lot. But when People travel, wouldn’t they have to say things like: “One year later…” If that is the case, then our characters would get old, very fast. How would that work? And at the start of the role play, would hyperspace capability be invented?

Most likely hyper space would be invented on one side in a few weeks. And most Jedi warriors would be already at bases where they would serve for several year rotations.

Is there a plot planned or a basic thread?

It doesn’t have to be much, just a rudimentary concept to help push the role play along.

Yes I have had a concept planned. I just need people to help get things rolling.

Then I will be glad to join if I may.

Thanks, and welcome to the Order.

And that cues my second question. In the role play can one be aligned to the Dark Side but not necessarily be Sith?

I suppose one could. I mean that has happened in Star Wars before.

Ok and again thank you for joining.
And I also realized that with a new type of timeline wouldn’t that mean new ships? So if anyone could come up with some ideas that would be great. Thanks you.

One more thing, I’m a little confused as to the timeline? @Ultra-commando mentioned this was the Great Hyperspace War, however, you also stated that this takes place 150 years before the Old Republic?

There was no hyperdrive in these days so travelling across the galaxy took months to a year to get to most planets.

Okay, so this would take place sometime in the 40,000 BBY range? Which doesn’t particularly fit as the Jedi Order was founded around 20,000 BBY… sorry I am just incredibly confused as to when this is supposed to take place.

Wait there is a date when Hyperspace was made!!!