The Scriosian’s Guide to Survival: Discussion

On this topic, the current four of us and any who choose to write later will world-build, share characters, and discuss plot happenings for The Scriosian’s Guide to Survival.

Slowly though it may come, the discussion shall commence! 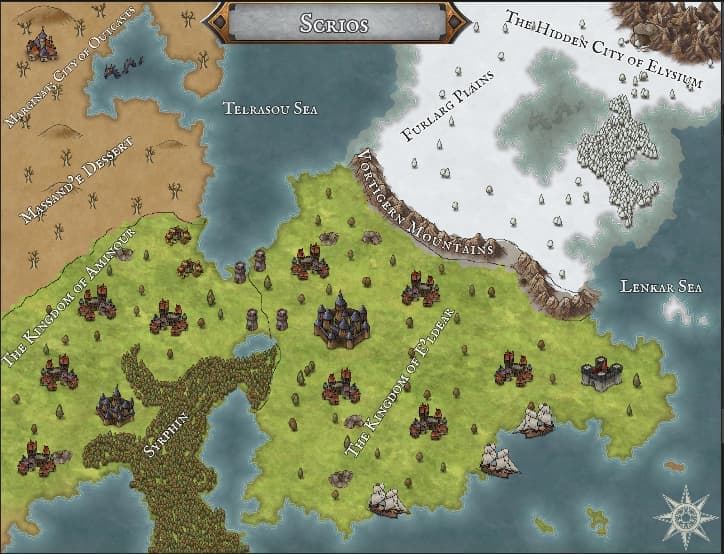 Considering we have several kingdoms to work with, should all of them be invaded or only a select few?

Just thought I’d say this: I’m doing nothing. It’s all my brother. He’s just including me in the credit for reasons I do not know.

I feel like I should know this, but I don’t recall hearing anything about invasion. Could you elaborate on that? Do you perhaps mean the old rule being overthrown and the new beforementioned shady character taking over?

He’s just including me in the credit for reasons I do not know.

Oh, that’s alright. Did you still want to role play?

Do you perhaps mean the old rule being overthrown and the new beforementioned shady character taking over?

I mean that, yes.

Did you still want to role play?

Yes, I still want to participate.

Considering we have several kingdoms to work with, should all of them be invaded or only a select few?

We could discuss this with the others in more detail later, though maybe one kingdom could be corrupted and the others are corrupted over time in the role play?

maybe one kingdom could be corrupted and the others are corrupted over time in the role play?

So! Here is my character:

Brief Description: A girl in her late teens with sharp green eyes, a freckled face, and blonde hair woven into a single braid. She wears a brown, light weight cloak over her otherwise plain attire.

Weapons: None, she typically avoids combat.

Current Dwelling: The attic of an abandoned tavern.

Noice! I was gonna have a pick-pocket as well, ha ha! I’ll post my character at a later date. Or possibly later today.

(They could totally pick-pocket each other and not realize it. Heh heh heh…)

I was going to have a thief. But I should probably come up with something different at this point…

Ok, So I got the finalized map, Unless anybody has problems with it. 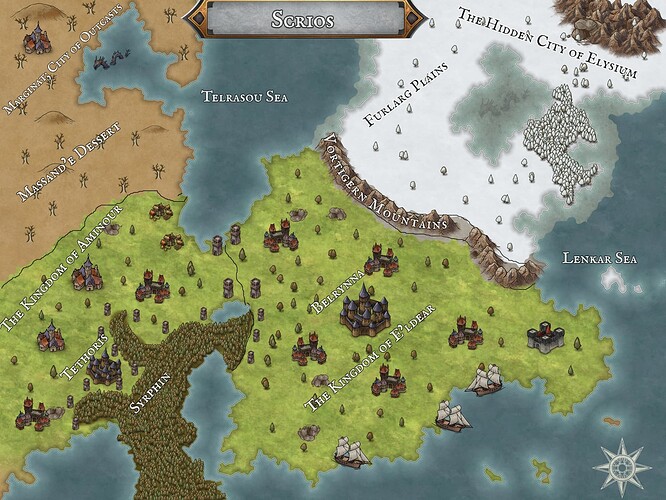 And I finished the lore. If anybody has any problems with it, do not fear to bring it up to me. Finally, I wrote the lore so it make sense to have it on the first post of the Role Play topic.

Lore:
“Aye, that was a good tale friend, My turn ey? Well, how about the Tale of Scrios.”

“Oh, so you haven’t ‘eard of the tale of Scrios ave ye? Well now, that’s a story worth tellin’. Take some seat at the bar, buy some drink and get a’listinin’.”

“Now before we start, you should know a little bit about the lands in the story; The first kingdom of Scrios, That is Aminour, was the smaller of the two kingdoms on the continent of Scrios. Ruins occasionally dotted their landscape and not many cities were inside its lands. It’s people opted more for farming communities and small towns. A pity really. However, it was a good place to stay if you wanted a soft bed and a good ale. Even so, always were the guards of Aminour watching the Woods of Syrphin. For dangerous creatures walked about between those trees: Large horned wolves, Trolls, Man eating bugs, and giant spiders. Aye, Giant spiders lived in those woods. But as I was saying earlier, No one dared enter that wood, for those that did, never made it back.”

“Now, the other kingdom of Scrios was called E’ldear. It also lived on the verge of Syrphin. However their arm of the forest was much smaller than those of Aminour had. The Kingdom of E’ldaer was a great powerhouse of Scrios. Its armies were outmatched by none. However, they had very little food production. So, with Aminour’s need for protection, and E’ldear’s need for food. They made a pact. From what I heard however, the nameless leader of E’ldear never liked it. But he never liked anything, nor did anybody know who he was. He could have been a she, and nobody would of known. He (or she) Was hidden, all of his commands were given by his advisors. I wish I knew what life was like before that leader took over. But now, where was I? ah yes, the Leader of E’ldear wanted to break the trust I do think”

“However, The Capital city of Aminour, Tethoris was right in between two arms of Syrphin. It was safe from assault from all sides but one. Only to be in danger of attack from the forest. Belrynna was much more safe from attack, but getting into Aminour was a problem. If they went through the cities, Aminour would most definitely call for help, repelling the assault. and no living man in Belrynna would dare go through Syrphin.”

“Now, E’ldear shared boarders with the Lenkar Sea, not very many people knew what was on the sea, for few who went ever returned, some say the edge of the world, some say sea dragons, but no matter how hard they searched, No sea dragons were ever found in Lenkar. I think it was the end of the world.”

“Another border of E’ldear was shared with the Vortigern Mountains. Little was known about those peaks except one thing: they bred dragons. The Dragons ravaged Scrios back before the kingdoms, but when they formed, the Vortigern dragons fell away, some say they went extinct, but some knew otherwise.”

“On the other side of The Vortigern Mountains lay the great frozen plains of Furlarg. Nobody I spoke to ever knew how it was always stayed frozen, only that it did. Another wood survived here however, but it’s name had passed out of all memory by the time this tale was founded.”

“On the other side of the woods and the frozen lake… Did i mention the frozen lake? It was told that it once connected with Telrasou, and sea dragons were free to roam there before it froze. some may even say that a sea dragon can still be seen in the ice, the king of sea dragons froze there when the lake did. But that’s nothing more than a children’s story. Never did see it myself.”

“Where was I? Oh yes, on the other side of the lake. So, on the other side of the lake, lay the hidden city of Elysium. An underground city it was, hidden in the far north mountains. It was truly advanced that city was. Fully underground, they were able to invent and grow without outside interference, they grew their own culture. I saw it with my own eyes, i did. They had machines that fired large rocks with the flip of a switch. And, i even heard, they’d tamed the dragons.”

On the other side of Telrasou, the dragon sea, was the great Dessert of Massand’e. Nobody is sure how a frozen plane and a dessert wasteland can exist on opposite sides of a small sea, but that it did. Massand’e was a great dessert, sharing a border with Aminour. No water was found inside the desert, but for a sea, and as such, that area remained almost completely unexplored."

Something that not much will believe however, is that a group of outcasts made a life out there in the dessert, surviving only by the sea dragon infested Telrasou sea that rested nearby. Water from the sea, and food from the sea dragons themselves. Where they lived was a city named Marginat. Many outcasts fled from Aminour, and E’ldear, and ended up at that city."

“There you 'ave it, the tale of Scrios.”

"Why, what do you mean I havn’t told you the tal- ah, yes, the tale of Scrios, I remember now. Order a few more drinks, and lets begin.

“It all started long before the time now, E’ldear was preparing for war with Aminour, but they knew they couldn’t have a war unless their own streets were good an’ clean first, so that began the purging.”

“The purging of what you ask? Why, the purging of crime, all criminals were being executed, now, quiet down and listen to the story!”

“They were purging their cities, E’ldear and the sourounding lands that is, not many were able to escape their grasp, but a few did, and those; those few are what this story is about.”

And as a final point, I was thinking that the takeover of the other kingdom would take place during the Role Play, and be less of a military take over, and more of a mental take over.

I personally think the map would be better without the black dividing lines. As for the tale…

It was awesome! I mean, I’m sorry bro, but I only skimmed it. Still, awesome. A lot of gray areas that might need improving on later and some things that could just be plum changed if others don’t agree on them, but it was awesome nonetheless! Good job on writing it!

I was thinking that the takeover of the other kingdom would take place during the Role Play, and be less of a military take over, and more of a mental take over.

All in all, very good beginning! You had a very solid, consistent narrative for your story teller.

Nice! Looking forward to it.

(They could totally pick-pocket each other and not realize it. Heh heh heh…)

Ha ha, we shall see.

I should probably come up with something different at this point…

You can still have a thief if you like, but if you really want to do something else that’s fine.

I came up with a much better character idea, posting it shortly, should we make a bio topic?

I think we’d be better off using this topic for bios, since there aren’t very many of us writing.

So who’s your character?

It’s a hunter (not an outcast) (sort of an outcast.) I just thought a bio topic would be better so we wouldn’t have to look through the entire discussion topic to find a bio. But for my character, almost finished, adding the final touches now.

for my character, almost finished, adding the final touches now.

Also, do you think we should create the main role play yet since we have a first post or wait until all the characters are created?

We could do it now.

Wonderful! Since you wrote the first post, I think it’s only fair that you make the topic.

We could totally do that now, I have no objections.

Alright, I’ll get on it shortly.