All in the name. Create and post information on your T:R character here!

Favorite pass time: Winning the Games, Breaking the speed limit in front of Tron, Rinzler, Beck, and Kestrel, Hanging out at the end of line club, going to Old, and New Bostrum.

Name: Dychtina
Gender: Female
Eye color: Electric blue
Hair color: White, worn in pigtails with purple tips
Species: Malaware
Function: Mischief maker
Outfit: Standard black gridsuit and a helmet with holes for her pigtails and a red visor
Equipment: Souped-up lightcycle, meteor hammer
Personality: Free-spirited, doesn’t like rules or the people who make them, wild, loves to laugh, an awful tease, rather self-centered, hidden insecurities
Peculiar traits: Her circuits are not all one color, rather they are many colors and are always changing like an ever shifting rainbow on her body. Drives other programs insane.
Friends: none
Enemies: anyone whom she classifies a “killjoy”.
Quotes:“Wooooooooooooohoooooooooooooooo!!!” “Now, that was fun!” “Faster! Faster!” (right before she turns someone crazy) “We’re all mad here”
Favorite Pastime: Breaking the speed limit, then outracing the programs who come after her. Disrupting the games in various ways. Causing general mayhem.

Wears this cool leather jacket unzipped over the main suit.

Rarely ever wears a helmet. Prefers these. They are his trademark you might say.

Weapons: orange-circuited light disc, light tonfas that lock onto the outside of his legs.
Transportation: Stealth light cycle, it has black circuits making it very hard to spot in the dark landscape.
Personality: ENFP, funny, tough, sarcastic, fast thinking, wants to forget how he got into this mess in the first place.
Friends: No real ones yet.
Enemies: Everyone until they prove themselves trustworthy.
Quotes: “You haven’t seen anything yet.” “Are you ready for this?” " 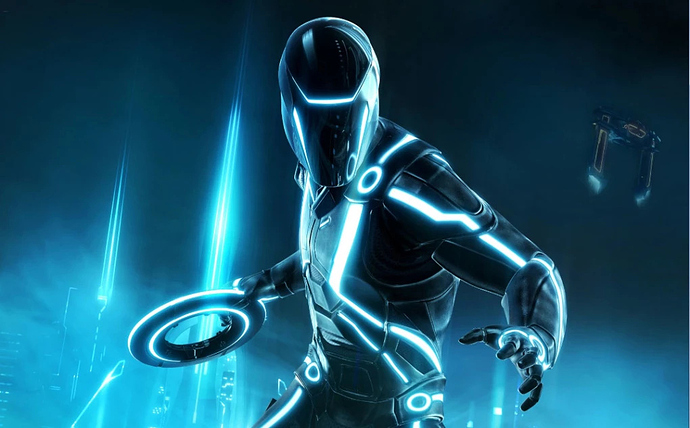 Personality: Optimistic at some times, will do anything to protect a Flynn
Friends: Kevin Flynn (He’s dead now…)
Enemies: Anyone who harms a Flynn
Quote: I told you
Favorite pastime: Lightcycle racing, training to fight better